It’s cool to be a goalie because you are unique from all the other players, and you have the potential to make or break a game. It’s unlike many other positions in hockey, as you are able to use any part of your body to save the ball.

In order to be a goalkeeper in hockey, you have to have the courage to get in front of, and save any shots that come in the way of the goal, no matter how fast they are going, or where the opposition shoots it.

Goalkeeping also requires you to lead your team’s defense, as you have a better view of the game than anyone else in your team, and can instruct your team to mark any unmarked players, or fill any gaps in the field. Besides that, you also have to have strength and athleticism, and be able to dive for a ball in an instant, whenever you are needed to. Your reflexes need to be cat-like.

Finally, you need to have a positive, give it a go attitude, as being a goalie is about having fun, as well as having to be a leader, and having courage and athleticism. Goalkeeping is a thrilling, exhilarating, and impressive position, and that’s why it’s so terrific. 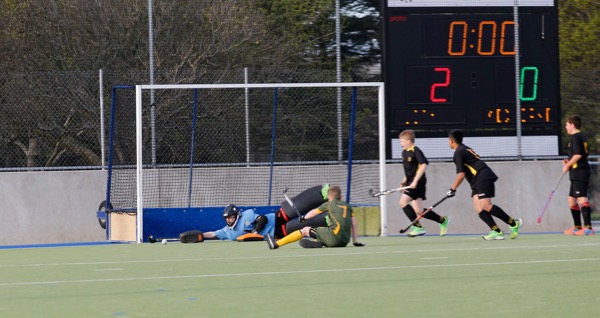 KJHC looks forward to hearing about Roman in goal in the years ahead.

KJHC process for selection as a goalie

Players can trial for goalie by stating their preferred position as ‘goalie’ in their online season registration.

Wellington Hockey has a special rule for goalies. Goalies can play for one team and play in field for another grade. This means goalies are the only registered members who can play two games of hockey in a day. This can provide great depth of hockey experience for budding hockey enthusiasts.

Happy New Yew KJHC whānau!I’m sure many of you are eager to get your extra curriculars locked in for the year, we won’t be able to confirm training times until the end of term one (the owners all lock in their own usage first). Preseason training, which is entirely optional, will be the last 4 weeks of term one. Season and Preseason registration will be in March. ... See MoreSee Less
View on Facebook
· Share

Registrations are rolling in for our U13 Development Camp. Make sure you sign up so you don't miss your spot!You will also be helping our NZ U21 players get to Australia to take on the Aussies in their own back yard in December. Register via PlayHQ - www.playhq.com/hockey-new-zealand/register/59401b ... See MoreSee Less